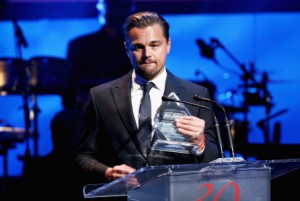 Leonardo DiCaprio, whose own foundation has awarded more than $30 million in grants to environmental and conservation causes worldwide, was on hand to receive the SAG Foundation’s Actors Inspiration Award. Empire’s Lee Daniels, American Hustle producer Megan Ellison of Annapurna Pictures and Into The Woods director Rob Marshall received Patron of the Artists Award.

The show itself was great. It was one of the first awards shows of the season, and could prove to be one of the best. There may have been a few too many infomercials played on a large screen above the stage about the amazing work the foundation is doing, but that can be forgiven since this was not just an awards show, but a coming-out party. The foundation, which tonight re-christened itself the SAG-AFTRA Foundation, had never done an event like this before. It should do many more.

Daniels, who confessed “I didn’t know there was something called the Screen Actors Guild Foundation,” spoke movingly about the hard times he fell on when he first came to Hollywood – homeless for a while and living in a church. “I was very blessed that I wasn’t shot growing up,” he said. “I was very blessed that I didn’t die of HIV, like many of my friends did. I went on to do drugs, because I thought I should be dead. I survived two heart attacks.” Most of all, he is thankful, and he thanks Hollywood for “embracing the unconventional, because I am that.”

Ellison, who was introduced by her American Hustle director David O. Russell, said that “watching him work is one of the greatest gifts I’ve ever been given.” She spoke honestly about her own self-doubts, and about how Hollywood “worked hard to make me hate what I love,” but said that she still believes, more than ever, in the power of artists and their art to transform the world.

Or as Diane Ladd said, “If civilization loses its culture, then we lose the civilization.”

Marshall spoke of his love of actors in all their variety, noting that Daniel Day-Lewis, who he directed in Nine, “doesn’t like to rehearse. He’d say, ‘Don’t squeeze the lemons.’ ”

Mark Ruffalo, whose Solutions Project seeks to move the world to 100% clean and renewable energy, introduced DiCaprio – they worked together on Shutter Island – as one of the kindest and most generous people in Hollywood. He was also impressed by the show itself. “Listening to the people receiving the awards,” he said, “you wish that this was the nature of all awards shows.”

DiCaprio spoke of his humble origins growing up on the East side of L.A., and thanked his parents, who were on hand, for everything they’d done so that he could give acting a go. And that’s given him the chance to speak up and take action to protect endangered species, and to sound the alarm about global warming. He noted that production on his now-completed next film The Revenant was disrupted by two “unprecedented climate events.” He’s now making a documentary about global warming. “The outlook is terrifying,” he said, saying that it has the very real potential of becoming the “worst calamity this world has ever seen.”

Even so, there were a few laughs, the best line belonging to SAG Foundation president JoBeth Williams, who observed that “the Foundation is the only thing in Hollywood that isn’t afraid of turning 30.”

During the past three decades, the SAG Foundation has granted more than $17 million in financial and medical assistance to SAG-AFTRA members and their families. It awards more than $400,000 in scholarships to the union’s members and their dependents every year, and its signature BookPals literacy program reaches 60,000 at-risk children every month.